Gardening Tips ~ Animals and Insects in Your Garden – Part 1

Submitted by Doreen Coyne, a member of the Richmond Hill Garden & Horticultural Society with additional information picked up from talking to several other members. 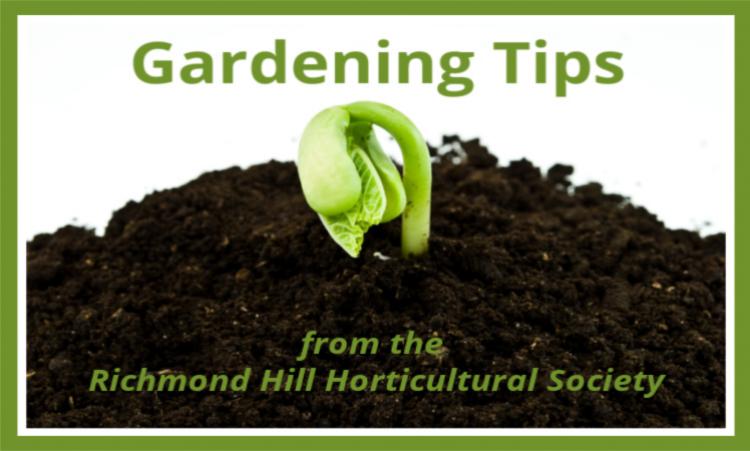 When doing a presentation earlier this year, the question of what to do about garden insects and pests was raised. This article, part one of three, attempts to help answer that question.

For squirrels, chipmunks, rabbits, a fence is probably your best defense!  To keep these hungry balls of fur from eating all your vegetables, you might try the following home-made low-cost garden fence. My son put in a new garden last year and the fence he put in kept the critters from the vegetables. It wasn’t too tall but tall enough to keep the little animals that come around our residential neighbourhood away from the veggies.

Here’s how he built the fence. First, he purchased the following supplies:
- Stakes: He decided on a small diameter dowel (2-3”) that we could easily cut at home to the desired lengths of 3-4 feet.
- Netting: Not sure if this was a forever solution although this is its second year now and it is holding its own. He bought garden netting – about 2+ foot wide and made of a plastic-like material. He found it online at Canadian Tire and I’m sure other big box stores and garden outlets would have it. The holes in the net are small and thus the animals can’t get in and haven’t tried to gnaw it apart either.
- Staples/Clips:  Given he used small stakes, the netting could be attached to the garden dowel with our construction stapler. My son also decided to go to the local dollar store and came back with several large potato chip bag clips for $2. Their “heads” were wide enough to go around the dowel. If you don’t have a stapler, you could use clips for the entire fence. Be sure to get the ones with the widest head openings.  A short piece of wire (or a twist tie) could be used for this purpose as well but the top should be stapled to avoid the wire from sliding down the shaft of the dowel.

Now starts the process of assembling the fence.  The stakes were driven in easily and deeply with a mallet leaving 2 feet above the ground. It has to be tall enough so that rabbits won’t hop over it. Then put the netting up around the stakes going in front of one then behind the next one, etc. The netting should go to the ground – indeed make a little trench and bury a few inches in the trench. At each stake, you can more securely fasten the netting using a staple at the top and another about 8” off the ground so as not to interfere with the lawnmower. That advice really should be taken if using clips rather than stapling! To make getting into the garden easier for yourself, we cut a piece of netting to make the “entrance”. We stapled the netting to the stakes on one side and clipped it to the stack on the other side such that removing the clips allowed an easy doorway for weeding and harvesting.

Your fence should now be done and you are ready to grow your plants!